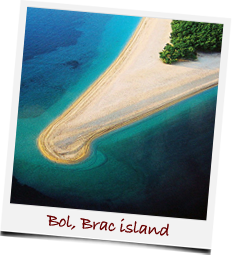 Where To Go On Holiday In Croatia

Here at Where to Go on Holiday HQ we know it’s wrong to have favourites, but we do, and Croatia is it! With its azure water, stunning islands, wall-to-wall sunshine and beautiful cities it’s hard to not fall for its charms.

The city of Split is picture perfect, scattered with plenty of historical buildings such as the Dioclatian’s Palace, St. Duje’s Cathedral (offering breathtaking views over the city and harbour) and Jupiter’s Temple. Engage in a spot of people watching from a cafe on the Peristil Square, absorb the atmosphere strolling along the Riva promenade with an ice cream in hand, and take in the views from Marjan Hill.

A short ferry ride from Split are the islands of Brac where you can relax on the iconic Bol beach, and Hvar which is well worth a stay. Base yourself in the stunning Hvar Town and hire a moped to explore the islands gems, such as Stari Grad, Jelsa and Basina. You’ll be forgiven for thinking you’re in Vietnam as you wind your way around the island overlooking water and lush islands.

Head to the island of Korcula and watch a Moreska (a traditional sword dance), potter your way around the compact city centre, relax on a beach or retrace the footsteps of Marco Paulo. From Korcula the popular and picture postcard city of Dubrovnik is in easy reach – here you can walk the entire city parameters on the city walls overlooking the UNESCO Placa Stradun, cliff jumpers from the Cafe Bu?a and out to sea. The old city Placa Stradun itself is worth exploring with its labyrinth of lanes, cute cafes and decent restaurants.

There’s a raft of day trips that you can do from Dubrovnik, including Mostar in Bosnia and Herzegovina, the coastal towns of Perast and Kotor in Montenegro, and staying in Croatia the pretty Elaphiti Islands and the attractive town of Cavtat.

Further along the coast the striking town of Makarska is set against a backdrop of the staggering Biokovo mountain range. Here the more adventurous can enjoy white-water rafting, trekking and parasailing, and for those after a more relaxing day the beach is a fantastic place to throw down a towel and catch some sun.

In the north of the country Zadar is a great city to while away some time with its large array of churches and the utterly bizarre sea organ located on Zadar's Riva – listen as the waves create music! Zadar has the added benefit of onward travel to Ancona in Italy, as well as being close to the breathtaking UNESCO awarded Plitvice Lakes National Park. The park comprises of 16 lakes, all connected by dramatically beautiful waterfalls – seeing really is believing!

Further north the alluring city of Pula charms visitors with its beautiful Roman amphitheatre, Zlatna vrata, Dvojna vrata and Herkulova vrata city gates, its tranquil St. Francis church and monastery, its famous truffles and its pretty Kamenjak beach. Take a fish picnic boat or day trip to the incredible Brijuni islands where you can enjoy unspoilt beaches and a safari park.

If you’re after an altogether more cosmopolitan break, then the capital city of Zagreb won’t disappoint. Use a tram to explore the Gornji grad (Upper Town) and Donji grad (Lower Town) which are both packed with sights, restaurants, bars and clubs. Wonder around the Mirogoj cemetery, ascend the imposing Medvednica mountain and enjoy panoramic views over the city, admire the art in the Mimara Museum or simply watch the world go by in one of the city’s many parks.