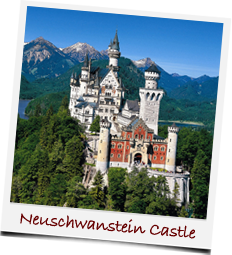 Where To Go On Holiday In Germany

Germany makes for a great holiday destination, with pulsating cities, fairytale castles, vast expanses of lush countryside and picturesque towns. Of course the country is also famed for its fine beers and tasty sausages making it a culinary adventure too!

For many Berlin is the perfect getaway. Steeped in history, its easy to while away time searching for the last vestiges of the iconic wall, gazing at the impressive Brandenburg Gate, taking a free walking tour of the city to discover the location of Hitler’s bunker and Checkpoint Charlie and being absorbed by the powerful Holocaust Museum.

Berlin has come a long way and is now firmly rooted as one of the most dynamic European cities. With a well developed bustling nightlife, a plethora of fine restaurants, fantastic shopping and a traffic infrastructure which is second to none, soaking up the city is easy.

Cologne boasts a vibrant arts scene, with countless museums and galleries. The city itself is home to the impressive Cologne Cathedral and plays host to Cologne carnival, one of the biggest street festivals in Europe. Germany’s second largest city Hamburg is also worth a visit, particularly around Christmas time when the market occupies the Rathaus Square.

Set in the countryside of the southwest of the country, the Neuschwanstein Castle should be on the itinerary of any visit to southern Germany. The imposing yet striking castle formed the inspiration for Disneyland’s Sleeping Beauty Castle and easy to see why!

To escape the hustle and bustle a trip along the Rhine Valley is a fantastic three or four day adventure taking in its steeply rising vineyards and medieval fortresses along the way. Alternatively the staggering beautiful Bavarian Alps offer fresh air and verdant countryside, with highlights including the Bayerischer Wald National Park where you can spot brown bears and if you’re really lucky the rare European lynx.

Of course there’s also the world famous Oktoberfest (which takes place in Munich) where revellers can enjoy local beers and traditional German cuisine.