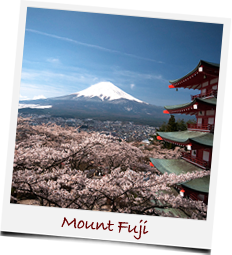 Where To Go On Holiday In Japan

Most people’s first thoughts of Japan are of sushi and geishas, but away from the stereotypes Japan is a staggeringly beautiful country full of mountains, ornate temples and well-mannered people.

Tokyo is like nowhere else! Almost futuristic, it’s difficult not to be taken in by the bright lights and modern architecture, but sitting side-by-side are glimpses of the old Japan too. Star attractions include the serene Imperial Palace, the jaw-dropping Buddhist Temple of Asakusa and the Meiji shrine. Also worth a visit are the Tsukiji Fish Market, the largest in the world, where you can enjoy sushi for breakfast, the Tokyo Tower for commanding views across the city and the Tokyo Disney Resort.

South of the capital lies Kamakura, home to the imposing 46-foot bronze Buddha dating back to the 13th century, and the iconic Mount Fuji – both a symbol of the country and a destination for pilgrims, the now extinct volcano draws people in their droves to admire its natural beauty.

The city of Kyoto, the one time former capital, has gained a well-deserved reputation as being one of the most beautiful cities in the country. To fill your camera head to the eastern part of the city where you’ll find the magnificent Kiyomizu Temple, astonishing views of the city from Mount Daimonji, the tranquil Heian Shrine and the serene Maruyama Park, famed for its cherry blossom. In the north of the city lies the famous Kinkaku-ji Temple, a must for any visit to the city, the Zen gardens of Ry?an-ji and the lantern adorned Hirano Shrine, whilst in the south the breathtakingly beautiful Daigo-ji should be on any itinary.

The Shitennoji, the oldest temple in Japan, can be found in Osaka along with countless other attractions including the Osaka Castle, the Umeda Sky Building and the Sumiyoshi Shrine. South of Osaka is the Yoshino-Kumano National Park where you’ll find the staggering Mount Yoshino and the captivating Nachi Falls, whilst in the south of the country Hiroshima offers a moving experience with a stroll around the Peace Memorial Park complete with memorials and statues.