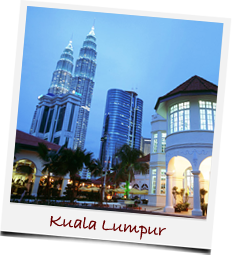 Where To Go On Holiday In Malaysia

Very literally a country of two halves, Malaysia is separated in two by the South China Sea. Mainland Malaysia (arguably the more developed of the two, though still unspoilt), is home to cities and monuments, whilst Eastern Malaysia is a wilderness of rainforest, wildlife, caves and beaches.

Mainland Malaysia is a heady mix of new meets old, with the impressive Petronas Towers and dazzling city lights of the capital Kuala Lumpur, set against a backdrop of age old tea plantations and dense rain forest. The cuisine is wide ranging, from Malay food stalls to Indian curries, Nonya to Chinese, and even Western dishes should you want them.

Highlights of the mainland include the Cameron Highlands (the centre of tea production) and the Taman Negara National Park which is home to the aboriginal Batek group and plentiful wildlife including monkeys, tapir and lizards. If you’re really lucky you may even spot an Asian elephant, leopard or rhino! Also not to be missed is the awe inspiring Kota Bharu city where you can encounter Malay culture with its incredible markets and palaces.

Also worth a look in are the picture perfect beaches which line the east coast of the peninsula. Be sure to visit Rantau Abang between July and September when giant leatherback turtles lay their eggs on the beach. Other notable beaches include the island of Redang where pristine white sand and azure blue sea awaits, the Perhentian Islands for those looking for a more pocket friendly break, and Tioman Island, a diving and snorkelling Mecca.

The other half of Malaysia is located to the north side of the island of Borneo, and is divided into two states – Sabah and Sarawak. In Sabah you’ll come face to face with orangutans at the Sepilok Rehabilitation Centre close to Sandakan, and green turtles, barracudas and sharks off Sipadan Island. Other highlights of a Sabah stay include traversing the magnificent Mount Kinabalu and lapping up some sun, sea and sand at the Abdul Rahman National Park.

For those in search of the road less travelled, the rainforest region of Sarawak is a sure bet. Grab yourself a canoe to discover the area and its many tribes, or visit the breathtaking caves of the Gunung Mulu National Park.