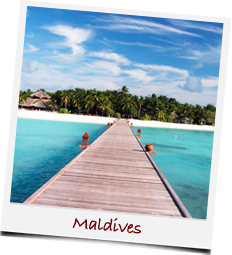 Where To Go On Holiday In The Maldives

Synonymous with luxury, romance and paradise, the Maldives is a series of islands nestled in the middle of the Indian Ocean that Lonely Planet describes as "the place for a holiday of a lifetime".

Coral reefs are literally the foundation of the Maldives – and certainly its biggest draw once you take away the small matters of wall-to-wall sunshine, exquisite cobalt blue sea and breathtaking natural scenery.

If the Maldives is about anything, it's about diving. Whether you're a beginner taking your first intrepid strokes, or a seasoned professional who has dived the Maldives a thousand times before, this country is the dictionary definition of a world-class natural environment that rarely fails to astound. Thousands of species of fish, sharks, rays and turtles can be discovered in the Maldives' coral reefs. Those less concerned with life under the ocean can while away time above the water sunbathing, waterskiing or fishing for tuna.

Your first glimpse of the country is likely to be the capital Male’ or the much bigger airport island of Hulhumale’. Neither are generally given much care or attention by tourists who are understandably intent on discovering the 1000+ islands which are strewn like confetti in the ocean.

Ecotourism is very much the name of the game here. A strictly limited number of islands are accessible to tourists and hotel numbers are capped to ensure the nations's natural beauty isn't tarnished. Just as well really, as your carbon footprint to get there will be in need of some pretty serious offsetting.

As the lowest country in the world, the Maldives is particularly at threat from rising sea levels as a result of climate change, although whether half the country will be under water in the next decade or two is yet to be seen. A lethal tsunami in 2004 damaged the country's tourism industry significantly, but subsequent redevelopment and a concerted PR drive has seen tourism bounce back dramatically in subsequent years.

Now is perhaps the perfect opportunity to visit one of the last unspolit paradises on earth?