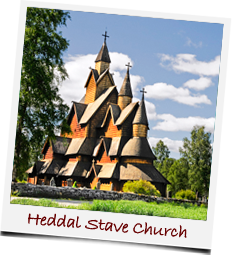 Where To Go On Holiday In Norway

It is the ancient glacial valleys (called "fjords") which have long been one of Norway's greatest holiday attractions. These narrow inlets can been seen in hundreds of places along Norway's 1000 miles of coastline, with the southern fjords of Sognefjord and Geirangerfjord being particularly fine examples.

The traditional fishing villages full of brightly coloured houses balancing on stilts is another of the most recognisable images from what Lonely Planet describes as "one of the most beautiful countries on earth".

Once the otherworldly wonders of the natural Norwegian wilderness have started to sink in, the next thing you're likely to notice is the cost of living. As one of the most prosperous countries in the world – and one that can boast one of Europe's highest standards of living - holidaymakers should brace themselves for an expensive trip.

Hiking, salmon fishing and nature watching are among some of the most popular summer pastimes. Visitors in May or June will be treated to the never-setting midnight sun, whilst those travelling above the Arctic Circle in December, January and February will be able to catch a glimpse of the legendary Northern Lights.

In the far North of the country you will find Lapland, where reindeer spotting, dogsled excursions and even under-ice diving can all be enjoyed. Meanwhile, the North Cape is now a major tourist attraction, as is the island of Spitsbergen where black mountains, icebergs and glaciers dominate supreme.

Don't make the error of avoiding Norway's cities however. Bergen with its medieval quarter, Lillehammer with its open-air museum and the capital Oslo with numerous art galleries and museums makes this country's most populated places almost as mesmerising as the scenery.

Alteratively, if you're looking for a slice of traditional Norwegian life, make the effort to visit some of the oldest villages where you will find medieval wooden churches for which Norway is quite rightly renowned. Our top picks would be Heddal, Lom or Røldal.