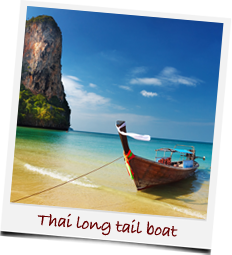 Where To Go On Holiday In Thailand

Thailand has seen a boom in popularity over the last decade and it’s easy to see why. Tropical beaches, lively cities, cheap living costs, guaranteed sunshine, superb cuisine, rich culture and a welcoming population mean that Thailand has the whole package.

For most the adventure begins in the capital of Bangkok – a city of temples, delicious yet cheap Thai food, floating markets and shopping. Exploring the city is made possible by a plethora of transport options – from tuk-tuks to water taxi and Skyrail to motorbike taxi - so getting around is both easy and affordable. Main attractions include the Wat Arun Rajwararam and Wat Pho Buddhist temples, and the Grand Palace.

The ancient capital and UNESCO World Heritage Site of Ayutthaya is accessible by boat from Bangkok. Scattered with intricate temples, carefully restored stupas as well as ruins, the area gives an insight in Buddhist life in Thailand.

In the north of the country Chiang Mai draws tourists in their droves, but don’t let that put you off as there’s plenty to see and do. The city is famed for its night bazaar selling handicrafts as well as its many festivals, notably Songkran, a city-wide water fight to celebrate the Thai New Year, and Loi Kratong in which the waterways are covered with decorated floating banana leaf containers and sky lanterns are released into the night sky. The area also has many attractions such as the Wat Phrathat Doi Suthep, Wat Chet Yot and Wat Umong temples, and activities such as Thai cooking lessons and Thai massages.

Thailand benefits from swatches of pristine coastline and countless breathtaking beach resorts. The island of Ko Pha Ngan will please those in search of rest and recuperation and hedonists alike with its pristine beaches and famed Full Moon Party which is held once a month. Neighbouring island Ko Samui also boasts a raft of awe-inspiring beaches and enjoys a more laid-back vibe.

The island of Phuket, Thailand’s largest island, is equally worth a visit. The western side of the island is home to world renowned beaches and the lively resort of Patong. The southeast of the island is where you’ll find largely untouched beaches, and the interior is home to mangrove forests, pineapple plantations and the Phra Taew National Park. Phang Nga Bay, one of the most beautiful bays in Thailand, is famed for its quaint fishing villages, caves and limestone cliffs.

With the cost of holidaying in Thailand cheap by British standards there’s never been a better time to go and grab yourself a slice of paradise.