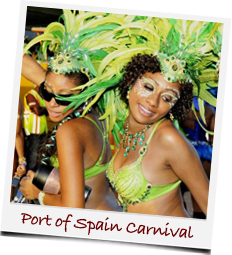 Where To Go On Holiday In Trinidad & Tobago

Trinidad and Tobago is nestled in the south Caribbean and consists of the main population centre, Trinidad, and another large island, Tobago. As the earliest settled part of the Caribbean, it has a rich but checkered history, having changed hands many times since Christopher Columbus stumbled across Trinidad in the late 15th Century.

The tropical climate and lush mountains make it one of the UK's favourite Caribbean holiday destinations - and the biodiversity which is shared across all major ecosystems is a major draw for many. Time your holiday right and get there the Monday or Tuesday before Ash Wednesday and you'll get to enjoy a Carnival that many call "The Greatest Show on Earth."

Trinidad, where over 90% of the population live, is the business centre which has en economy largely based on oil and gas. From a base here, you'll be able to enjoy all kinds of outdoor pursuits, be it rainforest hiking, fishing, kayaking or turtle watching. Bird watchers and nature buffs will be blown away by the island's biodiversity, whilst shoppers and foodies will be able to indulge in culinary fare that is a fusion of many different cultures. Last but not least, fans of steelpan couldn't ask for a better destination. The national instrument has its birthplace here - and the annual steelpan competitions are quite simply out of this world.

Tobago is essentially the chilled out one of the two - and here is where you will find more of a tourist-driven economy. Highly regarded for its eco credentials, Tobago has won many awards as a top eco destination. As well as being home to the oldest protected rainforest in the Western Hemisphere, here you will find secluded beaches, luxury villas and excellent snorkelling in the reefs that surround the island. Tobago is also the birthplace of goat and crab racing which takes place in the village of Buccoo over Easter. Miss it, and you're unlikely to see anything quite like it again.