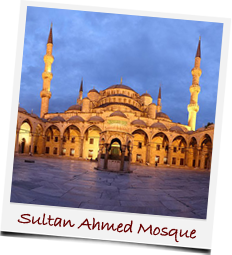 Where To Go On Holiday In Turkey

Turkey offers plenty of opportunity for rest and relaxation, whether that’s as a part of a package deal or an independently arranged visit. A mix of coastal resorts and bustling cities means that Turkey offers a variety of holiday types and so there’s something for everyone.

The capital city of Ankara is normally overlooked in favour of Istanbul by those in search of a city break. However, with its old neighbourhoods, citadel and Atatürk Mausoleum it’s definitely worth consideration. Of course Istanbul is celebrated with just cause. It’s staggeringly beautiful Sultan Ahmed Mosque (also known as the Blue Mosque) looks over the city imposingly, and its other attractions such as its bustling Grand Bazaar, spectacular Galata Bridge spanning the Golden Horn and elegant Süleymaniye Mosque add to the charms of this dynamic city.

For those in search of a beach break, Turkey is far from shy on options, boasting 5,000 miles of coastline spanning four seas. Over the course of the last few decades Turkey has seen a boom in tourism and consequently coastal regions have developed to cater for the increased interest. This means that for the holidaymaker there’s a plethora of options all at reasonable prices.

The most popular of the coastal areas is the Aegean coast, home to the well-loved resorts of Bodrum and Marmaris. From the Aegean coastal area there’s easy access to a number of must-see sights such as the magnificent and well preserved ancient Greek city (and later to become an important Roman city) of Ephesus.

Further down the country the alluring Turquoise Coast offers holiday gems such as Antalya, home to Hadrian’s Gate, the pretty Hidirlik Tower keeping watch over the city and the breathtaking Upper and Lower Düden Falls. And with average temperatures running above 20°C throughout a large part of the year coupled with beautiful beaches set to a backdrop of the Beydaglari Mountains it’s easy to see why it’s so popular.

So pack your bags and great ready to experience this country of culture, hammams, busy bazaars and fabulous beaches and start exploring!